Patch 3.3 is bringing fantastic new content to StarCraft II’s Co-op Missions in the form of Mutators, Weekly Mutations, and Mastery Levels. These new features will be available to anyone playing StarCraft II, including Starter Edition players!

Mutators are special conditions that will bring additional challenge and diversity to existing Co-op Missions. Mutators can vary wildly, from having to fight a completely cloaked army, to dodging lava erupting from the ground. You’ll face these and more in our Weekly Mutations. 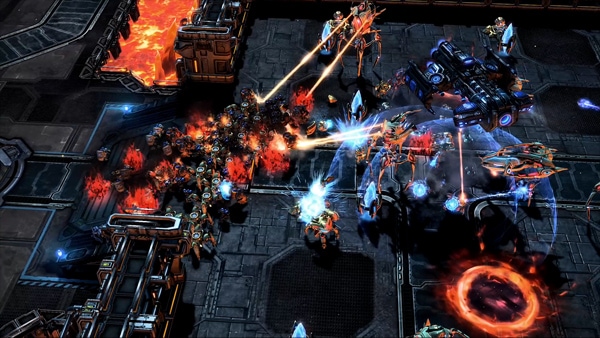 We call our first Weekly Mutation “Train of the Dead.” This challenge takes place on the “Oblivion Express” Co-op Mission, which still requires you to stop the supply trains. However, we’ve turned up the difficulty by deploying three deadly Mutators against you.

The second challenge we’re looking at is called “Time Lock” and takes place on the “Lock & Load” mission. Army position, movement speed, and timing are paramount to success on this map. The following three Mutators will cripple each of these factors.

If you’re able to conquer a Weekly Mutation, you’ll be rewarded with a bounty of bonus experience. There is a bounty for each of the four difficulty settings and completing a higher difficulty will reward you with the lower difficulty bounties. So if you beat the Weekly Mutation on Hard, you’ll receive experience bounties for Hard, Normal, and Casual. All of this extra experience will be very useful when earning the new Mastery Levels.

With all of these new challenges, you’re going to need some extra firepower, and that’s where the new Mastery levels come in. Any experience you earn on a maxed out level 15 commander will go towards earning Mastery levels, up to a maximum of 90. Each level grants you a point that you can spend on any of your level 15 commanders to increase their power. For example, you can spend points on Kerrigan to increase her attack damage or her energy regeneration rate. You’ll be able to decrease the time it takes to deploy Swann’s Laser Drill or increase the health of all his structures, including his turrets. 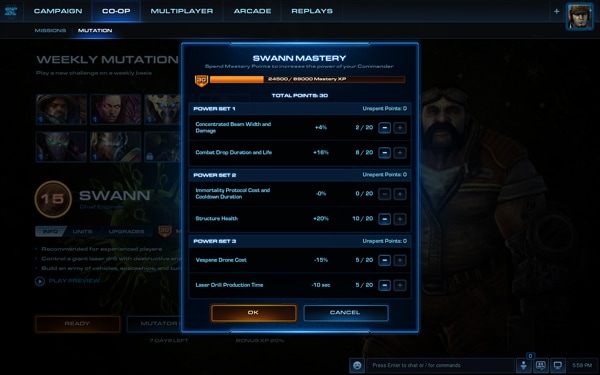 With up to 90 points available, you won’t be able to max out every category so you’ll need to make strategic decisions before heading into battle. Fortunately, you can reset your points at any time to prepare yourself for the next mission.

We’re excited to bring to you these new features to Co-op Missions in the upcoming 3.3 patch. We’ve invented many devious and diabolic Mutators that we want to test out but what cool ones can you come up with? Let us know in the comment section below.